Given the challenges of online lessons, I have–this year more than ever–worked hard to find lots of pieces that will be quick wins for my students. For a piece to be a quick win, I look for these characteristics:

Recently, I’ve composed two new pieces that have been quick wins for many of my students over the past few months. I hope you’ll give them a try.

What are some of the pieces you’ve found to be quick wins with your students?

In my studio, summer is a great time to let students work on collaborative projects. Schedules tend to be lighter, and we don’t have the pressure of recitals or adjudications lurking just around the corner.
When I know one of my piano students also plays another instrument or takes voice lessons, I like to ask them to do a piece with another piano student. When that’s not an option, I might ask if they have a friend who could collaborate with them.
Parker and Drew know each other from church where they both sing in a choir that I accompany. I proposed the idea of having them play the Finzi Carol together a few months ago. They liked the idea, so they both got the music and started practicing. Today, they got together for the first time to rehearse. Their excellent preparation made the piece go together easily. Proud of them!
Parker, at the piano, has just completed 6th grade. Drew, on clarinet, just finished 7th grade. Drew is a student of Walter Yee. The piece is Carol, from Five Bagatelles, Op. 23 by Gerald Finzi.
I’m curious to know how other teachers set up collaborative playing experiences for their students. Have any stories or tips to share?

“I want to work on song writing in my piano lessons this summer,” Dylan said.

“Okay, get some lyrics written for your first summer lesson and we’ll get started,” I responded.

I love the opening lyric of the piece she worked on this week: “I play piano for a crowd, and everyone goes wild, and that’s who I am.”

She began by writing the lyrics. Then she figured out the chord structure she wanted to use. I showed her a long list of pop songs based primarily on the I vi IV V chord structure, so she liked the idea of starting with that, but she made quite a few variations, as well. Next, she recorded herself playing the piano part. Then she added a percussion track; and finally, she recorded her vocal part. She did all of this with the GarageBand app on her phone. That way she could go home and continue working on the piece after the time spent with me in her lessons.

I could have insisted that Dylan continue working on repertoire and technique in her summer lessons, rather than taking on this project; but I’m guessing this affirmation of her innate creativity will have a bigger impact than learning another sonatina might have had.

​”If I had a third arm, I could play this duet all by myself,” Annie commented after learning both parts of a duet in her Piano Safari book.

“But it’s so hard to find clothes when you have a third arm,” I​ replied.

“I know!” she responded. “I used to have one, but it was too inconvenient, so we had it removed.”

Pretty quick wit for a third grader, I thought to myself.

My piano students often enjoy a bit of silliness, and I’m always happy to oblige. It can help make their lessons fun and memorable.

Yesterday, Elliot came to his lesson with his practice chart filled out, and a solid amount of daily practice recorded–enough to warrant a dive into the prize box. He chose this sticky, stretchy green hand as his prize, and you can see what he immediately thought to do with it. It was 60 seconds of silliness that made us both laugh. Not a bad way to start a lesson.

Later in the day, Sarah, who’s healing from a broken finger on her right hand, was working on a piece for left hand from Melody Bober’s delightful Grand One-Hand Solos for Piano, Book 3. Sarah’s a good sight reader and a strong pianist in general, but she had tripped over a rhythm on her first reading of the piece the week before, so I immediately gave her a silly lyric to help establish the rhythm. By today’s lesson I’d already forgotten the lyric; but she, obviously, had not. As she played the piece, she sang the silly lyric, and her rhythm was perfect.

“My name is Sarah. What is yours?”
“My name is Mister Light. Don’t forget it!”

A bit of silliness can go a long way with children to help them enjoy their lessons, or, as in Sarah’s case, to correctly establish a musical concept. We teachers are always mindful about spending our minimal lesson time well, but a bit of silliness and a few hearty laughs needn’t be time wasted.

Embrace a bit of silliness, I say. Your students will love you for it.

Sometimes, a listen is worth a thousand words.

The notes and rhythms were correct, but it was too fast, and it sounded mechanical and boring. There was no voicing of the melody, no breathing with the phrases, no rubato. It was dreadful.

“Listen to this,” I said, and pulled up Ella Fitzgerald’s recording on YouTube.

“Now make it sound like that,” I requested when we finished listening.

That was all he needed. He got it.

“I hate that piece!” Patrick responded after hearing Simple Gifts, the next piece in his method book. “It’s all sweet and cheerful. Yuck!”
He had just finished learning two pieces from Diane Hidy’s set titled Mean Little Monsters, and he loved those. I wasn’t surprised that Simple Gifts didn’t appeal to him.
“What if we make it minor?” I asked, demonstrating the first line of the piece in the parallel minor key.
“Yeah!” he exclaimed. “We’ll call it Needful Things. It’ll be dark and depressing!”
Problem solved. Happy 7th grader. 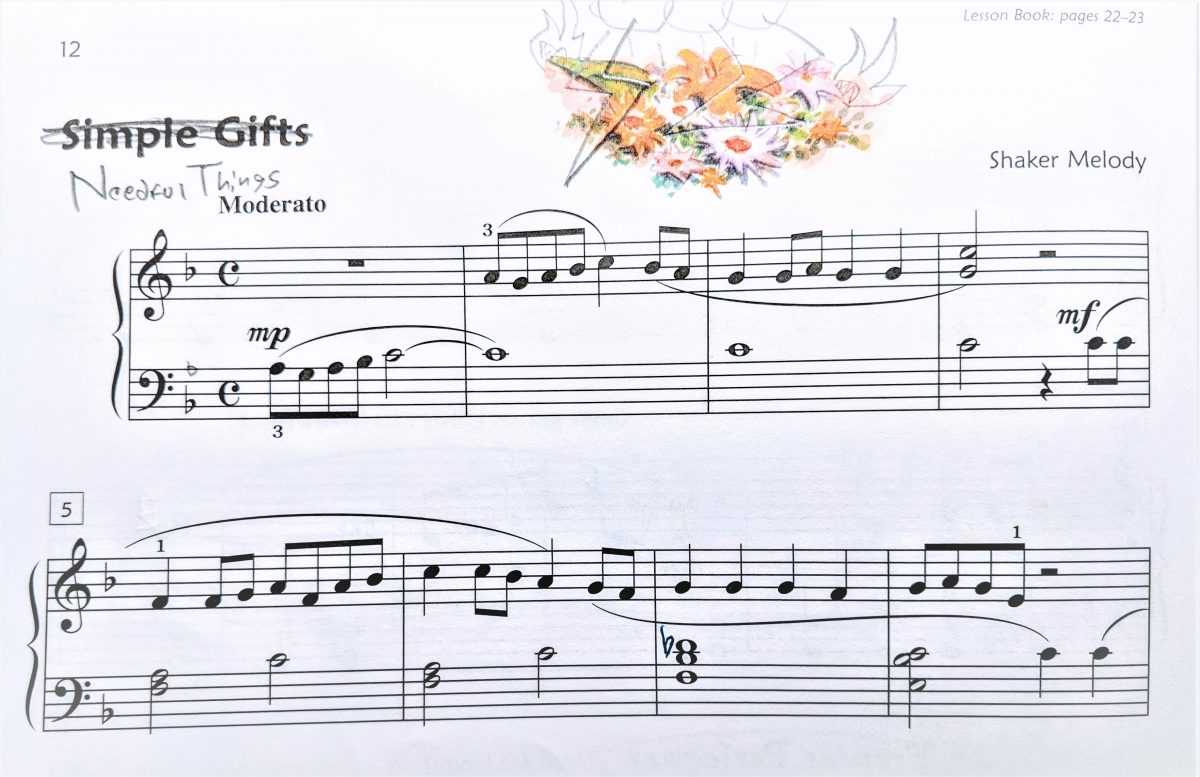