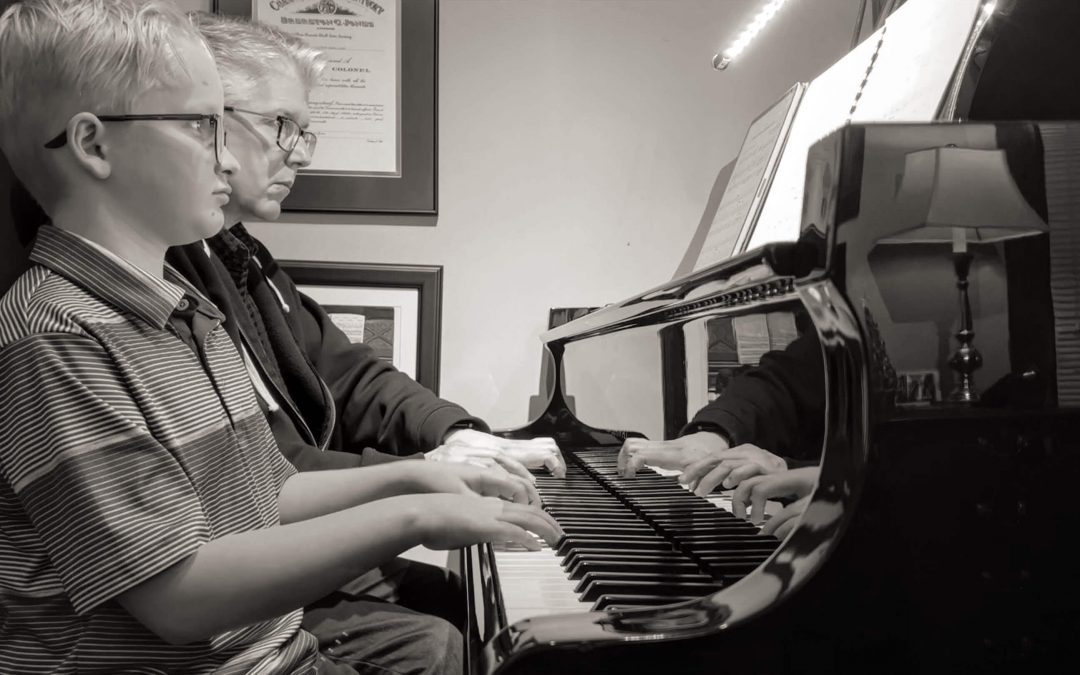 I still remember vividly the first time my piano teacher played a duet with me. I was absolutely wowed by how beautiful the music sounded. It was so much fuller and more sophisticated than the single-line melodies I was able to play as a five-year-old beginner. I remember feeling like the music was just bouncing off the walls in Miss Major’s piano studio. From then on, I wanted her to play duets with me at every lesson.

That memory reminds me to play with my own students often. Sometimes I just improvise a duet part. Many times, pieces for young beginners come with duet parts written out. Occasionally, I compose and notate my own duets to play with students. I’ll share two Christmas duets for early-level students here.

A few weeks ago, Jaxon, who started lessons last school year, let me know that the organist at his church had invited him to play a duet with her on the organ for a children’s Christmas service. The invitation presented an opportunity to arrange a setting specifically for that event. I immediately thought of “Once in Royal David’s City.”

Jaxon is about the age of the young choristers who always sing the opening solo of that carol for the King’s College Christmas Eve Service of Nine Lessons and Carols. I showed him a video of one of those solos and told him the story about how the choristers don’t know who will sing the solo until moments before it happens when the choirmaster points to the student who will sing. (Hear a recent version of that solo in the video below.)

Jaxon seemed to enjoy that story and video, and it gave him some fun context for a Christmas carol he hadn’t previously known. He learned it well and played it very nicely for church. Here he is rehearsing it at his piano lesson.

Here’s a link to the sheet music: Once in Royal David’s City.

Another Christmas duet I’ve arranged for early-level students is a setting of the Kirkpatrick tune for Away in a Manger. In order to fit the whole arrangement on a two-page spread, I notated the solo entirely in the treble staff. This required some ledger line notes that students at this level haven’t typically learned. I decided that since that since the hands stay in one position for an entire verse, this shouldn’t be a problem and would require only a brief explanation. Now that numerous students have played this arrangement, I can confirm that the introduction of ledger lines hasn’t bothered them at all.

The arrangement includes two verses; the first one in C major; the second, in F major. I did not use a key signature in the student part.

This year, my second grade student, Morgan, learned this setting. We only took time for the first verse, so I improvised a little ending when we recorded it. When I watched the video, I realized that I had her end of the bench too far from the piano, but she still managed to play with confidence.

Here’s the sheet music for this arrangement: Away in a Manger.

For a short while, the Away in a Manger sheet music is available as a freebie.

Happy holidays, friends! I hope you are enjoying this season with your own students.